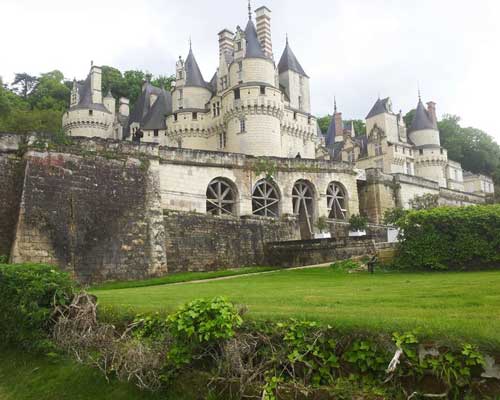 The Loire Valley lies within the heart of France. The Grand River Loire stream right through the centre of the region and is France’s longest river. The water of the Loire starts its journey on the Massif Central and ends in the Atlantic Ocean.  The Loire is declared a UNESCO World Heritage Site for its cultural landscapes, magnificent castles and regal homes.

This part of France has a superb topography and perhaps less known for the fact that this region also supports a mouth-watering flora and fauna. The Loire Valley region’s river and streams reveal treasures to behold – its scenery, its climate and its untamed nature.

Stopover the Chartres Cathedral located in the medieval town of Chartres. It is an outstanding model of Gothic style architecture. You’ll be amazed by the 152 beautifully stained glass windows that are noted for their remarkable deep blue colour. Part of the relics found is a tunic believed to be owned by the Virgin Mary herself.

Drop by the Tours Cathedral (Cathédrale Saint-Gatien de Tours). This cathedral has an amazing detailed design and exquisite facade, and the outside is just as impressive as the interior, with its Gothic windows and splendid walls.

Don’t forget to visit the Cathedral of St Etienne of Bourges which was constructed between the late 12th and late 13th centuries. It is considered to be one of the great masterworks of Gothic art because of its proportions and the unity of its design. Besides the magnificent architecture, it affirmed the influence of Christianity in medieval France.

Visit the Abbey of Fontevraud or Fontevraud Abbey which is considered as one of the greatest monastic cities in Europe. The Abbey has a remarkable size and originality. It was transformed into a prison by Napoleon in 1804 and was saved from destruction and became a dreaded penitentiary centre. The Abbey today is a renowned site for concerts, conventions and expositions.

Take some time away from Palaces and Cathedrals to see the charming Berce Forrest. This forest is surrounded by oak trees and there are trails marked by arrows on the trees to follow. It is idyllic, unspoilt, with gigantic oak trees towering 50 meters into the sky before branching out.

Visit the lakes of Brenne which is known as the land of a thousand lakes. This welcoming place is also home to Europe’s biggest population of European pond turtles. In the summer you can observe these little turtles when they sunbathe. You can also find different insect species. This is where two-thirds of France’s dragonfly species can be found.

Would you like to see the domain of rare eagles?  Visit the Orleans Forest, France’s biggest state-owned forest. This forest has very rich soil and has a number of bodies of water which explains the diversity of animal and plant species in the area.

Take some time out and see Sologne nestled in the loop of the Loire River. It is famous for its forests, lakes and moors. Three-quarters of the area is occupied by forestland plus 12,000 hectares of lakes. The moors is the typical Sologne feature. Its rivers are highly populated too and its lakes are home to an impressive array of plant species.

If you want to see wooded hillsides, paths bordered by green hedgerows, ribbons of water running through meadows, and rolling landscapes then Perche is the place for you. Perche is a haven of greenery which any nature lover will enjoy, and nature really prospers in this area.

Another highlight would be the Charters Light Show (Chartres En Lumiere). During this event, colorful lights illuminate historic sites and some principal buildings of the old city of Chartres including the cathedral, media Library, theatre building and many more.