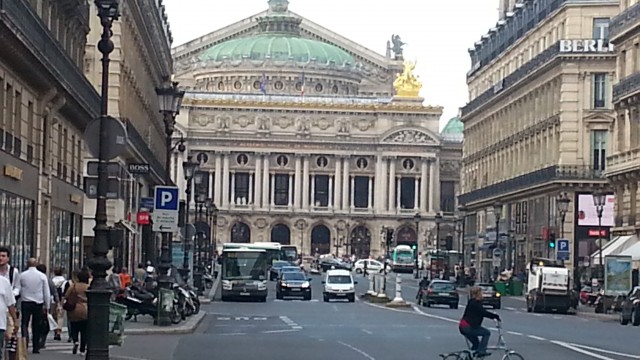 Paris is one of the world’s most popular city destinations. Known as the “City of Light”, it’s famous for many sites, historical landmarks, museums, churches and war monuments. Whenever  in Paris, do visit some of these great attractions:

Eiffel Tower
The Eiffel Tower is a world famous structure that rises 300 meters tall (984 ft). You will see its top from all over Paris. This iron lattice tower located on the Champ de Mars in Paris is named after the engineer Gustave Eiffel who is known from his revolutionary bridge building techniques.

Basilique du Sacré Coeur
Sacré-Coeur Basilica is a Roman Catholic Church and minor basilica, dedicated to the Sacred Heart of Jesus, in Paris. A popular landmark, the basilica is located at the summit of the butte Montmartre which is the highest point in the city. Its interior is bedecked with gold mosaics and towering stained-glass windows, and you can listen for the peal of one of the world’s heaviest bells.

Cathedrale de Notre Dame
Cathedrale de Notre Dame is one of the most famous cathedrals in the world which was built in the Gothic style. Numerous kings were crowned or married here, and it is also where Napoleon was crowned emperor by the pope. It is one of the best-known symbols of the French capital, and the most-visited monument in France. Notre Dame de Paris is widely considered one of the finest examples of French Gothic architecture in France and in Europe.

Musee du Louvre
The Louvre Museum was originally a royal palace but now is one of the largest, most important and most famous museums in the world. Some of the museum’s most celebrated works of art include DaVinci’s Mona Lisa and the Venus de Milo statue.

Musée d’Orsay
The Musée d’Orsay is a museum housed in a grand railway station built in 1900. Home to many sculptures and impressionist paintings, it has become one of Paris’s most popular museums. This is where the Impressionists are exhibited and contains works from Van Gogh, Pisarro, Manet, Monet, Renoir, Cezanne, Seurat, Millet, sculpture by Rodin and others.

Jardin des Tuileries
This place has a singular history, like everything in this city, created by Catalina de Medicis (wife of Henry II) the Palais des Tuileries was constructed in the place where there was several tiles factories (that’s the reason of the name) demolished to make room for the palace building. The gardens belonged to the palace, now it is a public park.

Arc de Triomphe
The Arc de Triomphe or the Arch of Triumph is one of the greatest arches in history. It’s the second-largest triumphal arch in the world and anchors the middle of a star of 12 avenues that radiate out from the center of Place Charles-de-Gaulle Etoile. On top of the arc is a viewing platform that provides wonderful views of Champs Elysées and other avenues stretching away from the perch high above the center of the square.

Champs Elysées
This impressive promenade stretches from the Place the la Concorde to the Place Charles de Gaulle, the site of the Arc de Triomphe. It is lined with trees and is perfect for a stroll down the avenue. There is so much to see here at any time of the day or night.

Jardins du Luxembourg
The Jardins du Luxembourg is probably the most popular park in Paris. It is Paris’ second largest but arguably its most lively park. Like the Tuileries, much of it was originally the gardens of a royal palace but unlike that largest of the city’s green spaces, the Luxembourg’s palais is still here. This park is a green oasis in central Paris with many statues and fountains.

Bateaux Mouches
No visit to Paris would be complete without taking a boat cruise down the Seine. View the city from the heart and soul of Paris, the Seine River. Take one of the river cruises from Bateaux Mouches which takes you along areas of the oldest and most majestic historic monuments.

Sainte-Chapelle
If you are at Notre Dame, Sainte-Chapelle is very close and definitely worth a visit. It is the finest royal chapel to be built in France and was built to house the relics of the Passion of Christ. It also features a truly exceptional collection of absolutely breath-taking stained-glass windows.

Centre Georges Pompidou
Pompidou’s center was constructed in 1977 as the big cultural center for every possible exhibition. The building is often called as “city machine”. It seems to be an unfinished construction because the woods and the pipelines are exposed. The pipes and ducts are all color-coded: blue for air, green for water, red for elevators, yellow for electricity, grey for corridors and white for the building itself.

Tour Montparnasse
At 210 meters, the Montparnasse Tower is the tallest skyscraper in Paris and affords an uninterrupted 360° view from the rooftop. The views are stunning from the top. The advantage is you can take a photo of Paris with the Eiffel Tower in the shot.

Pont Neuf
The Pont Neuf is the oldest and best known bridge in Paris and together with the Pont Alexander III, one of its most beautiful. With its superb design and decoration, it was the central feature of the grand royal architecture to be found along the Seine.

Pantheon
The Panthéon was first designed as a church, but later turned into a civil temple. It was originally built as a church dedicated to St. Genevieve but after many changes, now functions as a secular mausoleum containing the remains of distinguished French citizens. Among those buried in the Panthéon’s necropolis are Voltaire, Rousseau, Honoré Mirabeau, Marat, Victor Hugo, Émile Zola, Jean Moulin, Marie Curie, René Descartes, Louis Braille and Soufflot, its architect.

Canal Saint-Martin
This striking canal is an extension of the River Seine. It is a pleasant place for a boat ride or a summer stroll. With its swinging footbridges, the Canal Saint-Martin is yet another example of how alluring Paris is. The canal offers plenty of opportunities for biking, sightseeing, and enjoying Parisian life at its most relaxed.